We will write Sn for the secant numbers

Tn for the tangent numbers

and En for the Euler numbers

The unsigned Springer numbers are defined as

The secant Swiss-Knife polynomials are defined as

The first few of these polynomials are given in table 1.

In table 2 we see the signed versions of the secant, the tangent and of the Springer numbers.

Shifted and scaled to (2n/n!)Sn(z/2+1/2) we get a picture of the beautiful objects of our interest (see figure 1). The polynomials have two `centers´ (zero-points) at z = −1 and z = 1 which reflects the oscillating nature of the cos function. 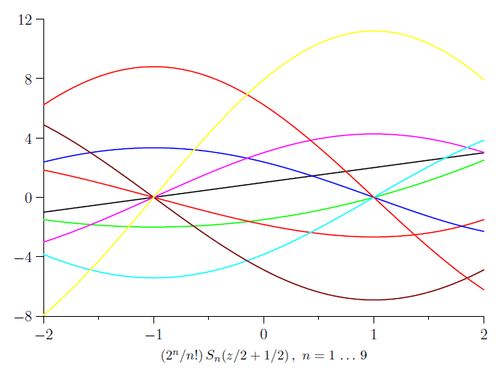 A recursion for the Swiss-Knife polynomials

To compute the secant Swiss-Knife polynomials Sn(z) we need to know the secant numbers Sn. If n is odd only secant numbers Sk with k < n are needed, which we assume to know by inductive hypotheses. If n is even the situation is different as then Sn <> 0. The key observation is

Now it is straightforward to give the recursion. In Maple parlance:

The sinusoidal character of the polynomials

The scaled Swiss-Knife polynomials are defined as 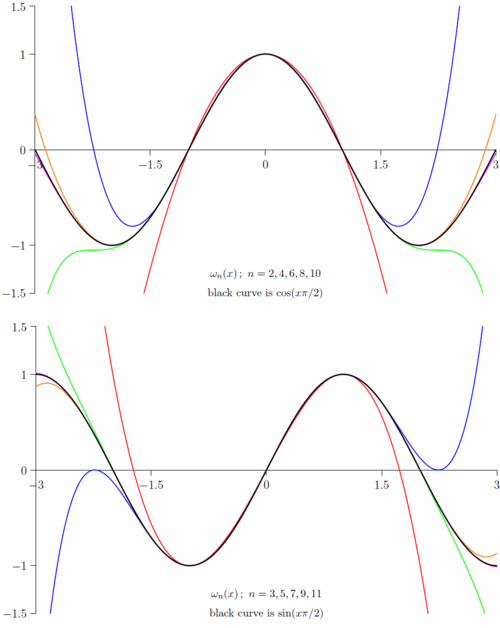 The tangent Swiss-Knife polynomials are defined as

The first few of these polynomials are given in table 3.

In table 4 we see the signed versions of the secant, the tangent and of the Springer numbers.

Scaled to (2n/ n!)Tn(z) we get a nice plot of these polynomials (see figure 2). The polynomials have one `center´ at z = 0 which reflects the behavior of tanh in the neighborhood of 0. 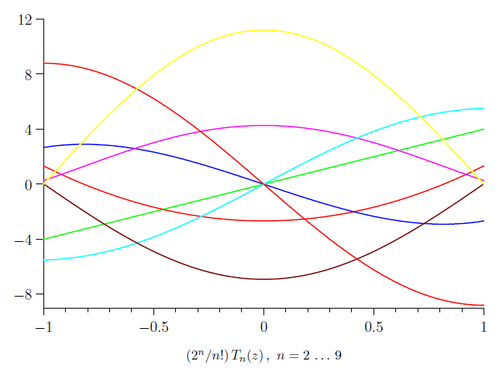 Let us defined the sum of the S and T Swiss-Knife polynomials, weighted by p and q, which we assume to be complex values defined in a superset of the interval (-1, 1).

We call these polynomials the pq-Swiss-Knife polynomials. The special case En(z) = En(1,1)(z) could be called `Euler polynomials´ if this name would be at our disposal.

The special choice of p and q

leads to the complex Swiss-Knife polynomials.

• Alternating sum of powers of even integers (n ≥ 1)

Short guide to the relevant sequences at OEIS

The secant, tangent and Euler numbers are core sequences of OEIS, can be easily found and have a rich corpus of comments. Therefore I will restrict myself here to the afore-mentioned polynomials.

The secant Swiss-Knife polynomials Sn(x) are in A153641. They are denoted there Wn(x) and introduced via the double-sum transformation applied to the Kwang-Wu Chen sequence. Peter Bala gives the representation Sn(x) = -2/(n+1)B(X;n+1,x), thereby associating them with certain generalized Bernoulli polynomials.

The En(1,1)(z) polynomials are in A109449, albeit with unsigned coefficients and in ascending order of powers. Again both a representation in terms of Euler polynomials as well in terms of the afore-mentioned transformation is given.

The definitions used here are streamlined compared to those on OEIS. Moreover the computational relations used here give a more intuitive and compact framework, building on a single recursion, described in the  appendix.

We now give a representation of the secant, tangent and Euler numbers based on a general sequence-to-sequence transformation.

The Euler, Bernoulli, Genocchi, Euler zeta, tangent as well as the up-down numbers and the Springer numbers are either values or scaled values of these polynomials. The Swiss-Knife polynomials are also connected with the Riemann and Hurwitz zeta function. They display a strong and beautiful sinusoidal behavior if properly scaled which has its basis in the Fourier analysis of the generalized zeta function.

The first time I considered the Swiss-Knife polynomials was on March 2008. I was surprised that I could not find a discussion of these polynomials in the literature. Therefore I added a page describing the polynomials to the English Wikipedia. This page was deleted on (2008-12-27) from Wikipedia on the ground that the Wikipedia editors "strongly suggest that the subject of the article is original research". (Original research is not allowed to be published on Wikipedia.) If you know an earlier mention in the literature please let me know.

Let us define the Dirichlet β function as

Note that our definition is slightly different from the standard definition. We will also use the notation β(s) = β(s, 1/4).

In my last blog (Zeta Polynomials and Harmonic Numbers, April 2010) I used a similar definition with β(-k) replaced by ζ(-k) to introduce the ζ-polynomials which led to a representation of the Bernoulli numbers.

The first few β-polynomials are given in table 6.

Some values of the β polynomials can be found in table 7. 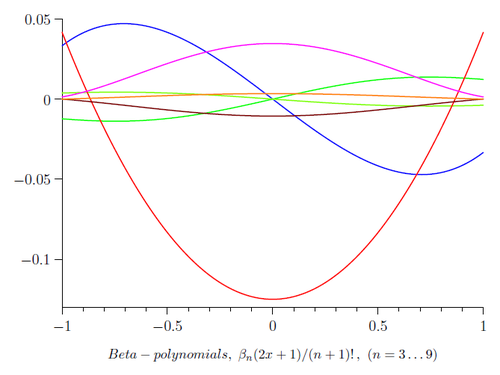 Note that this terminology is in accordance with R. P. Stanley's recent "A Survey of Alternating Permutations" (preliminary version of 21 September 2009), who gives the definition

And, believe it or not, even Don Knuth changed his Euler numbers in Concrete Mathematics: "I'm changing the notation for Euler numbers to agree with papers in combinatorics ...". (See the Errata page of CM.)

Now, if we take the transition from the secant numbers to the full-fledged Euler numbers (secant plus tangent) as suggested by Richard Stanley's definition of the Euler numbers seriously, is it then not natural to consider also 'new' Euler polynomials which reflect this change?

Some zeta and beta values

For z = 0 we get the famous Euler-Catalan formulas. Once upon a time these formulas and the proof that their values are rational multiples of some power of π belonged to the 1 million dollar problems in mathematics.

By the standard definitions of the ζ and β functions

we see that this is the sequence

Our approach combines these important special cases of the ζ and β function in a uniform way by only referring to the beta polynomials.

The following little routine computes five famous sequences of special numbers in mathematics (Euler, Tangent, Springer, Genocchi, Bernoulli) in a few lines, using only the power function and the binomial coefficients. It is based on an evaluation of a representation of the secant, tangent and E polynomials which we have discussed above.

Surprisingly the (coefficients of the) β polynomials are not yet in OEIS. Therefore I submitted these numbers to the OEIS A177762.

Here you can get a [1] pdf version of this blog.