Our blog post investigates the relationship between the Bernoulli function and the generalized Euler constants.

(A001620) in a study of the harmonic numbers. Euler tried hard to reduce this constant to other known values and reconsidered it often over his lifetime but did not succeed; in his own words:

"This number seems also the more noteworthy because even though I have spent much effort in investigating it, I have not been able to reduce it to a known value."

In these studies he developed approximation techniques and other numerical methods which are still in use today. In 1765, while studying the Gamma function, he derives the formula

to the Bernoulli numbers (here in the form as reconstructed by J. C. Lagarias):

and the Bernoulli numbers. In this blog post we consider a kind of generalization of these two formulas:

is the Bernoulli function introduced in the Bernoulli Manifesto, which reflects a discussion the author had with Don Knuth some years ago.

This formula shows that

can be seen as the speed of the real Bernoulli function when entering the positive half plane after descending from the negative infinity as a negative-super-exponential function (i.e.

), before the up to then monotonous function turns into a strongly fluctuating one, marked by the Bernoulli numbers at the integers. 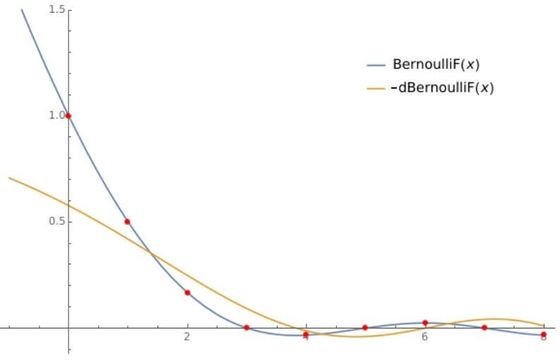 I spared the effort to convert the post from TeX to Html, but if you like to know more about the connection between the Euler's constant, its generalization by Stieltjes and the Bernoulli function you can read it here:

P. S. Help needed: I observed that apparently no translation of Riemann's classical paper "Über die Anzahl der Primzahlen unter einer gegebenen Größe" into English has a free license. Therefore I translated it myself and released the translation worldwide into the public domain. However, the translation still needs native English speakers to improve it. At the bottom line of this page you find a link which shows how you can help: Riemann's paper.