This is the latest approved revision, approved on 21 October 2017. The draft has template/image changes awaiting review.(+)
Readability: Reviewed
Jump to: navigation, search

This article is under construction.

Please do not rely on any information it contains.

19 is a prime number. Any positive integer can be expressed as a sum of 19 or fewer fourth powers.

Roots and powers of 19

In the table below, irrational numbers are given truncated to eight decimal places.

In the OEIS specifically and mathematics in general,

refers to the natural logarithm of

, whereas all other bases are specified with a subscript.

As above, irrational numbers in the following table are truncated to eight decimal places.

Values for number theoretic functions with 19 as an argument

Factorization of some small integers in a quadratic integer ring adjoining the square roots of −19, 19

are unique factorization domains. There is something quite interesting about the way in which

is a UFD. But first, we'll look at

. In that domain, the norm function is

is a Euclidean domain in which the absolute value of the norm is a suitable Euclidean function. Given any two nonzero numbers

, it is always possible to find two other numbers

If this is true, then the Euclidean GCD algorithm can be implemented in this domain. Whatever two nonzero numbers in the domain are input into the algorithm, a sequence of quotients and remainders is produced, and the absolute values of the norms of the remainders form a decreasing sequence. The Euclidean algorithm may or may not always produce optimal results, but it should always produce an answer in a finite number of steps.

is a divisor of

, or the other way around, then

. If this is not the case, it does not automatically mean

are coprime, but it does mean that

. Since the norm is multiplicative, it follows that

????
as specified by the theorem. ENDOFPROOFMARK

We then say that

is norm-Euclidean, and from this it automatically follows that it is a principal ideal domain and therefore a unique factorization domain.

, can we find numbers

? In this domain, the norm is never negative, and since the numbers are spread out throughout the complex plane rather than crammed on the real number line, it is easy to make diagrams to help us visualize these things. In the following diagram, 0 is represented by a black dot, the nonzero numbers of

by green dots, and the nonzero numbers of 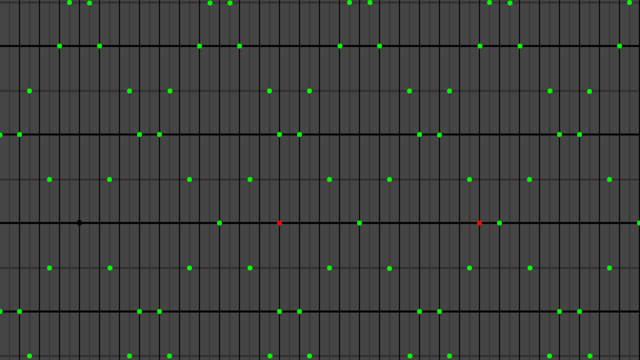 As you can see, 10 is a red dot that almost smack dab in the middle of a lozenge-like shape formed by green dots. It stands to reason that, as values of

, those green dots closest to 10 correspond to smaller

than green dots farther away. We need to find just one dot such that

It's not necessary to continue this with

and so on to see that there is no value of

suitable for the Euclidean algorithm to be found.

We do need a theorem to prove that

is not Euclidean for any suitable function whatsoever, and it becomes a little more involved to show that it is a principal ideal domain. But we will not include those theorems here at this time.

Of course the Euclidean algorithm is not the only way to find GCDs. From prime factorizaton alone it would be obvious that

. Now follows a table of factorization of some small integers in

Since both of these domains are UFDs, looking at the factorizations of ideals does not give us much insight. The factorization of an ideal is pretty much the same as that of the generating number. Often it's just a matter of changing parentheses to angle brackets.

However, there are a few subtleties to consider, which concern 2 and 19 (and, of course, also their negative counterparts).

(as noted above), the ideal

are associated by multiplication by a unit. And so,

, 2 is prime, as is the ideal generated by it. The equation

has no solutions in nonzero integers. This means that if a number in this domain has nonzero imaginary part and an even norm, then that norm is divisible by an odd number greater than 1. For example,

have norms that are divisible by 5 and by 7, respectively.

Lastly, note that although

, as ideals go, we still have

Factorization of 19 in some quadratic integer rings

As was mentioned above, 19 is a prime number in

. But it is composite in some quadratic integer rings.

Representation of 19 in various bases