There are no approved revisions of this page, so it may not have been reviewed.
Jump to: navigation, search

This article page is a stub, please help by expanding it. 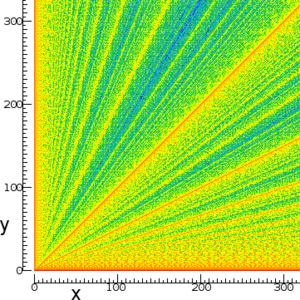 Number of steps in the Euclidean algorithm for . Red points indicate relatively few steps (quick), whereas yellow, green and blue points indicate successively more steps (slow). The largest blue area follows the line , where represents the Golden ratio.
The number of steps to calculate the GCD of two natural numbers, and , may be denoted by .[2] If is the GCD of and , then and for two coprime numbers and . Then

as may be seen by dividing all the steps in the Euclidean algorithm by .[3] By the same argument, the number of steps remains the same if and are multiplied by a common factor

Therefore, the number of steps may vary dramatically between neighboring pairs of numbers, such as and , depending on the size of the two GCDs.

The recursive nature of the Euclidean algorithm gives another equation

If the Euclidean algorithm requires steps for a pair of natural numbers , the smallest values of and for which this is true are the Fibonacci numbers and , respectively.[4] This can be shown by induction.[5] If , divides with no remainder; the smallest natural numbers for which this is true is and , which are and , respectively. Now assume that the result holds for all values of up to . The first step of the -step algorithm is

and the second step is

Since the algorithm is recursive, it required steps to find and their smallest values are and . The smallest value of is therefore when , which gives . This proof, published by Gabriel Lamé in 1844, represents the beginning of computational complexity theory,[6] and also the first practical application of the Fibonacci numbers.[4] This result suffices to show that the number of steps in Euclid's algorithm can never be more than five times the number of its digits (base 10).[7] For if the algorithm requires steps, then is greater than or equal to which in turn is greater than or equal to , where is the golden ratio. Since , then . Since Thus, . Thus, the Euclidean algorithm always needs less than divisions, where is the number of digits in the smaller number .