This is the latest approved revision, approved on 3 January 2012. The draft has 27 changes awaiting review.(+)
Readability: Reviewed
Jump to: navigation, search
This article page is a stub, please help by expanding it.

Conway's PRIMEGAME is an algorithm devised by John H. Conway to generate primes using a sequence of 14 rational numbers:

Starting with 2, one finds the first number in the machine that multiplied by 2 gives an integer; then for that integer we find the first number in the machine that generates another integer. Thus A007542 is generated. Except for the initial 2, each number in A007542 having an integer for a binary logarithm is a prime number, which is to say that powers of 2 with composite exponents (A073718) don't show up.

It may be helpful to think of the "machine" as an actual machine, with an intake on one end and an outtake on the other end. A workpiece, in this case, a power of 2, is fed into the intake, the machine is activated and after making some noise and shaking, the workpiece comes out the other end transformed into another power of 2. And of course we can take this new power of 2 and put it into the intake once again. The following illustration shows an 8 going in and a 32 coming out: 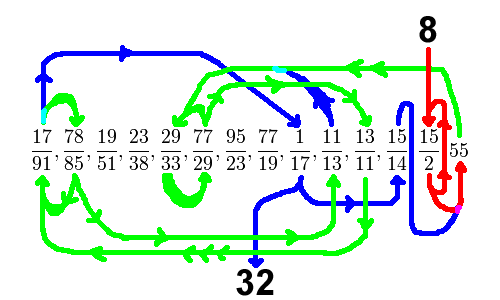 An effort was made to show or at least give an idea how many times each pathway is trod by the number of arrowheads or the thickness of the lines. (Note that the illustration above uses a slightly different version of the machine that appeared in R. K. Guy's 1983 paper).

Viewed this way, we can roughly generalize what goes on inside the machine:

The machine bears some resemblance to a Rube Goldberg device. It takes over seven hundred steps to obtain the first four primes, whereas the sieve of Eratosthenes in about three steps.

Here are some selected points of interest in A007542: