This is the latest approved revision, approved on 4 April 2017. The draft has 47 changes awaiting review.(+)
Readability: Reviewed
Jump to: navigation, search

The 3x+1 problem concerns an iterated function and the question of whether it always reaches 1 when starting from any positive integer. It is also known as the Collatz problem or the hailstone problem.

Obviously there can be no consecutive odd numbers in any trajectory, but there may certainly be consecutive even numbers, especially when the trajectory reaches a power of 4, in which the trajectory quickly plummets to 1 after passing through all the intervening powers of 2. (Note that since the odd-indexed powers of 2 are congruent to 2 modulo 3, they are only reachable from halving a power of 4).

What is not so obvious is whether every trajectory eventually reaches a power of 4.

According to the Collatz conjecture, no 3x+1 problem trajectories heading towards infinity exist!

According to the Collatz conjecture, no 3x+1 problem eventually nontrivially cyclic trajectories exist!

But the 3x-1 problem does have eventually nontrivially cyclic trajectories!

Trajectories that eventually hit a power of 2

The Collatz conjecture stipulates that all 3x+1 problem trajectories eventually hit a power of 2 (thus falling straight down to 1, like hailstones.)

The number of halving and tripling steps for

The number of halving and tripling steps for pure hailstone numbers

A008908 gives the number of steps needed for

to reach 1, while A006666 and A006667 give the number of halving steps and the number of tripling steps respectively. The numbers with a record number of steps are given by A006877.

A135282 records the largest exponent

appears in the trajectory started with

. It is believed that these exponents are only odd

, the trivial argument values of the Collatz function (which trivially fall down to 1 in

steps,) the "conjecture" would imply that for every nontrivial argument values of the Collatz function we must reach a power of 4 (even-indexed power of 2) for the Collatz conjecture to be true.

[1..105], if we consider only the non-trivial argument values of

, it seems that the largest

is a power of 2, and it seems all terms are even, unless

we obtain a hailstone history containing both situations in a very intricate way.

Sequences generated by iterating the Collatz function seemingly reach unpredictable heights.[1] Some starting values give sequences that jump up sharply, then come down and fluctuate in the neighborhood of the starting value before hitting a power of 2 and then proceeding predictably towards 1. 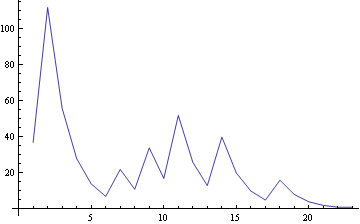 Thus the term "hailstone" is sometimes used to refer to this problem. But there are also starting values that don't jump up significantly until much later on, closer to the final fall. A025586 gives the largest value encountered in such sequences starting with each

in turn, while A033493 gives the sum of all values in such a sequence from

to the first instance of 1.

In the tree graph above, halving steps are denoted by black lines, while blue lines signify tripling steps (plus the addition of 1). The top numbers of each column above can be found in A033491, though of course going from

forward rather than backwards from

In 1937, Lothar Collatz proposed the conjecture

In the 3x+1 problem, no matter what number you start with, you will always eventually reach 1.

Paul Erdős said about the Collatz conjecture: "Mathematics is not yet ready for such problems." He offered $500 USD for its solution.[2] A generalization of the

problem has been shown to be a computationally unsolvable problem.[3]

Computers, being generally unable to recognize an infinite loop, usually have f(1) := 1 hard-coded in investigations of this problem,[4] or they might get stuck in the 4, 2, 1 cycle.

But of course in the search for a counterexample to the Collatz conjecture, they would have to be programmed to keep track of previous numbers encountered in the sequence to compare them against new values. Regardless, the computer would first have to be directed to a specific number after a human mathematician determined the properties the counterexample would need to have.

Obviously a counterexample, if it exists, must not be a power of 2. But how can we know a given number's sequence will not reach a power of 2? By allowing

to be negative, some possibilities are suggested: not all sequences for negative values of

. Sequences for some values, such as

is equivalent to changing the "tripling step" to

while maintaining the restriction to positive numbers; see A008894).

A possible generalization of the Collatz function for the

would thus correspond to