I am a chemical engineer, though with few and long ago working experience (graduation in 1988, TU Dortmund).
One of my hobbies are mathematical online games where regularly problems are published to be solved by the users.
If I do not find a fast solution for a problem, I mostly calculate results for small parameters and look for a pattern. The OEIS is helpful to find such patterns. It is a very nice encyclopedia.
I registered at the OEIS in order to submit a pattern which I had used to solve a problem of project euler.

Sequences which I submitted

Definition of meanders concerned by these sequences

A binary curve C is a triple (m, S, dir) such that

An example of a meander

Below a meander is shown. The list S consists of 24 elements with values of either 'L' or 'R' and starts with an 'L'. The values of dir are 0, 1 or 2. Each of them occurs eight times in the course of the curve.

The meander is illustrated as a curve of arcs with 120° (plotted by the help of the vector graphics language Asymptote and Windows Paint). 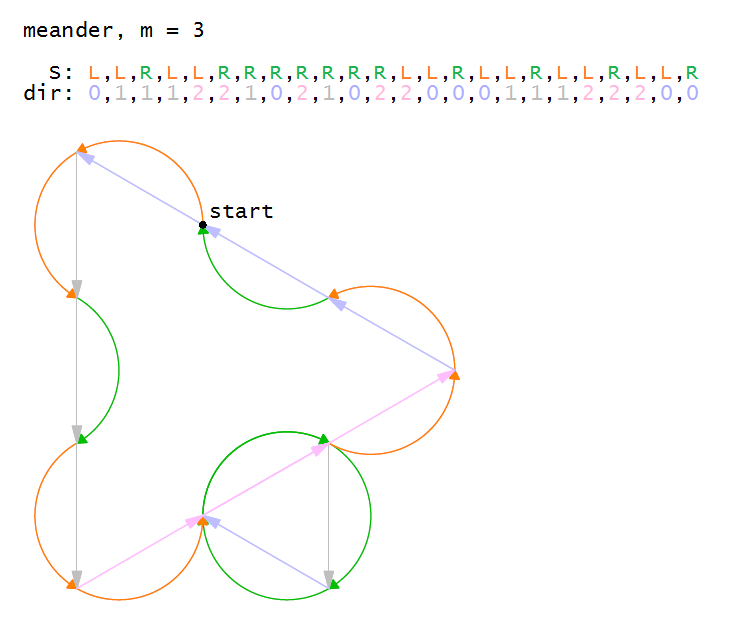 In the illustration there are arcs which coincide, so a point moving along the curve shows the meander more clearly.

The animation is plotted by the help of sage (version 4.8).

The following brute force code counts the amounts of meanders for a certain value of m, a certain length of S and different compositions of S. S is initialized as an array which consists of a one ensued by length-1 zeroes. The one stands for an L and the zeroes stand for Rs. S is incremented until it consists just of ones. For each state of S, it is tested if all values of dir are allocated length(S)/m times to a value of S. If this is the case, the curve is counted as a meander.

Some results of this counting for small values of length(S) are summarized in the tables below.

The tables match with the number triangles

For m=1, the amounts of meanders with a certain length and a certain number of Ls are found in A007318. For m=1, there is only one value of dir, so that in this case all binary strings of Ls and Rs which begin with an L are meanders. If the list S has a length of

Ls (the first element in S is always an L). The number of ways to build up such strings is

, the values in Pascal's triangle. However, if m exceeds 1, it is not yet proved for all lengths of S that the triangles match with the amounts of meanders.

How to determine amounts of meanders faster

So far, you saw a brute force method to determine and count the meanders. Peter Luschny describes an improved approach in his blog, under generating meanders. Using brute force, you know all meanders which are counted exactly.
However, in order to know how many meanders with a certain amount of Ls and Rs exist, dynamic programming can do the work. Start with one curve that consists of an L. Say it has got direction 0. It can be extended by either an R or an L and thus is the predecessor of two possible curves of length two. Add Rs and Ls until the whished-for length of curve is reached and keep track of the data needed to sum up the relevant binary curves: The total amount of Ls, the total amount of Rs, the last character, the direction resulting from that character and also how often each direction occurred. Concatenated to a string, these data can be the key of a hash. It's value can contain the amount of meanders belonging to that key. At last all curves with the required amounts of Ls and Rs for which all directions occurred equally often, are summed up, yet the exact course of these curves is unknown.

Below, in two tables an example of brute force and an example of dynamic programming for counting meanders of length 6 which contain three Ls and have a central angle of 120° are shown. The frequencies of the directions are denoted by

. The meanders are marked by an x. 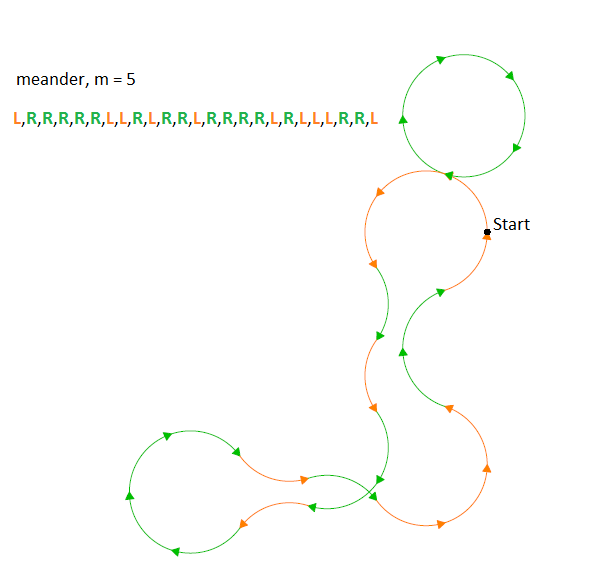 The curve is plotted by Asymptote Vector Graphics Language and the text is inserted by Microsoft Paint.